In the latest instalment of ‘1000 new and creative ways to starve children’, or, as it’s more commonly known, ‘The Conservative Manifesto’, the Tories have unveiled a new level boss of cruelty. Not content with the disaster that is sadistic benefit sanctions to adults, cuts to money for children who have lost a parent and changes to free school meals, they have now implemented their two child policy in the ‘child element’ of universal credit. This means that the child benefit that was in place previously has now been capped to two children per family. There are a few exemptions: Those who are adopting, those involved with kinship care and multiple births. The final exemption, dubbed ‘the rape clause’, means that a claim can be put in for a third or subsequent child who was conceived as the result of rape, which involves the victim filling out a form to essentially prove that they were a victim of sexual assault.

The Work and Pensions Secretary Esther McVey, demonstrating about as much charm, sense and sincerity as an entire album’s worth of Nickelback lyrics, said that the idea would potentially get victims of sexual assault “double support”. Now, I was never great at maths at school, mainly due to a preference of skipping off into the woods for a cigarette rather troubling myself with equations, but I’m pretty sure I remember being told that 1×0 was nothing. You see ever since the Tories ascended to the iron throne they have been systematically destroying care services for those experiencing sexual and domestic abuse. Everything from charity funding to policing, court and health services have been stretched to breaking point through austerity cuts and the disaster that is the introduction of the police and crime commissioners. Even the most tireless and dedicated services are finding themselves being forced to do more with less and less resources. 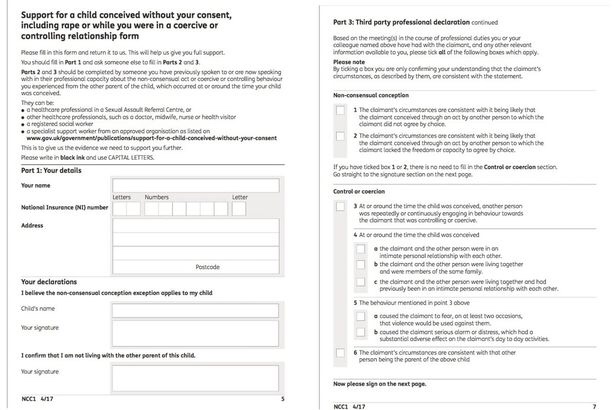 Her absolutely abysmal crack got even worse. I don’t know about you, but personally my favourite bit was where McVey claimed that applicants would not be “asked invasive questions”, as if questions demanding ‘proof’ of the rape that you were subjected to could be anything but invasive, as well as triggering, humiliating and with the potential to cause further trauma in such a situation.

Then today Theresa May and her band of chinless, braying twatrattles further defended their monstrous policy in the House of Commons by insisting that the tax credit claims would be handled in “as sensitive a manner as possible”. Really? And who will it be handled by? The same people conducting disability assessments who were asking people with Downs Syndrome when they ‘caught’ the condition? Or the ones who were sensitively asking mentally ill claimants why they hadn’t killed themselves yet?

One thing that we can be certain of is that it is not going to be handled by trained counsellors or independent domestic/sexual violence advisors who have the skills to care for survivors of sexual violence. The DWP have said it would operate a third party model, so survivors did not have to make disclosures to the job-centre staff and would instead talk to other professionals such as a social worker or an approved rape charity. However some bodies who may have been designated third parties have condemned the policy. The Royal College Of Nursing Scotland stated that it did not believe that it was appropriate for nurses or midwives “to arbitrate if a woman’s claim is consistent with rape”. In addition, Scottish Women’s Aid and Rape Crisis Scotland have refused to co-operate stating that third party processing is not compassionate. And those like myself who support victims of domestic abuse know that these forms will not help those who are still in a relationship with the person who raped them, or those who were attacked by an acquaintance or stranger, rather than within an intimate relationship.

Theresa May once smugly said “What do the conservatives do for women? Keep making us Prime Minister”. As if any man or woman would ever consider her or Thatcher something this country could be proud of. They are proof that this party does not have the interests of ordinary people at heart and are hell bent destroying the progress made by feminists over the last 100 years. The rape clause is not double support. It is an attack on vulnerable women and children, and watching two women in such a position of power stand and attempt to justify their actions is an insult to survivors.

As there is a Tori Amos song for every kind of intense emotion, I will reach as I always do for one of the most beautiful, Playboy Mommy.

Food, music and anarchism View all posts by punkfoodbandita