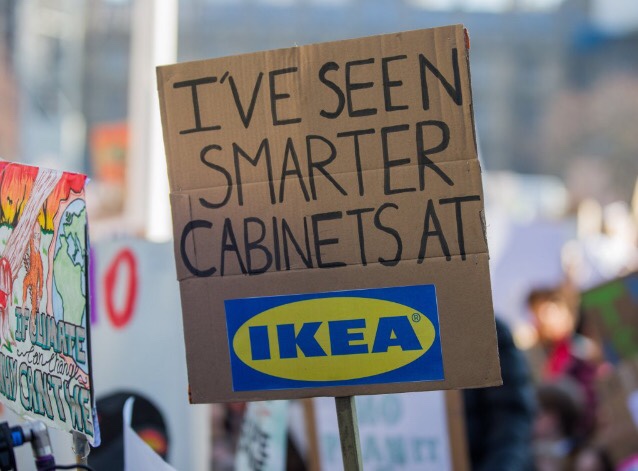 “But it is important to emphasise that disruption increases teacher’s workloads and wastes lesson time that teachers have carefully prepared for. That time is crucial for young people precisely so that they can develop into the top scientists, engineers and advocates that we need to help tackle this problem.” Theresa May

When it comes to getting the point, Theresa May is an absolute storm trooper. In one short statement, she not only managed to miss it once, but several times over in her cringingly embarrassing response to the school strike for climate action that took place in 60 towns and cities across the UK yesterday in a coordinated action that has also been seen across Europe.

As well as demanding immediate action to the imminent ecological disaster world leaders have been ignoring or denying for decades, the students are also demanding that the voting age be lowered so that they can actually participate in the processes that are effecting them.

Sat watching the footage this morning I was both inspired by protesters as they sang and blocked roads, as well as being appalled at their treatment by the authorities as we saw teenagers arrested, kettled and manhandled by police.

What the prime minister and many others don’t seem to understand is that there isn’t time for what she appeals. Her suggestion of staying in school, studying hard and getting good grades so you can grow up and become a scientist and save the planet is utterly ridiculous, not to mention a weapons grade level of patronising. They will not protest quietly or orderly or on a Saturday when it is convenient for you, and nor should they. Doing so has only meant they have been ignored.

Not one rational person on Earth, especially those currently in the field, believes that funding for environmental sciences will be anything other than as visible as the thousands of species we make extinct every year by the time these kids are adults. More worryingly, leaving it till then will be too late for the planet. We already know we have less than a decade to get our act together or the damage to Earth will be irreparable.

I’ve been involved in activism for longer than these kids have been alive, and I’m ashamed to say that in that time I’ve let myself become defeated and cynical. The school strike gave me a glimmer of hope that I didn’t believe was still there. They are self organising, vibrant and determined. The young are so often painted to be self absorbed entitled brats who can’t do anything themselves that their energy, their passion and their articulate words have taken the world by surprise.

It’s become apparent just how stupid Mays comment was, and many MP’s across the board, including some in the Conservative party are now tweeting support for the young protesters including Claire Perry, Caroline Lucas from the Green Party and Labour’s Rebecca Long Bailey, all declaring how their party is the one that will get them out of this mess and imploring them to all follow them. Which shows that they aren’t getting it either. For a start, most of these kids are quite a way off voting age and they are not, quite rightly, prepared to wait around until they are. This generation has been let down by the false promises of governments, while radical political organisations have grown bitter with constant infighting and online identity politics. It’s us that should be following their lead and not the other way around. 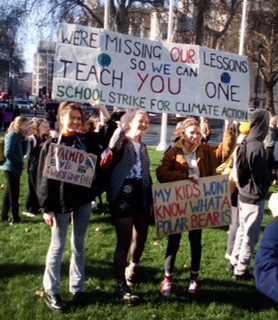 Stop trying to recruit this amazing generation to ideologies and agendas and actually let them teach us something. We have a situation now where the corporations who buy our politicians, the ones who block effective legislation against climate change, are seen as the visionaries, the ones who talk about creating a new, better world. While we know this is another example of their marketing doublespeak because their new world will only benefit them and is sure to destroy the planet, it is us, the once hopeful revolutionaries, who are now the cynics unless we find our fire again. We all grew so tired and weary with all of the hate and suffering that we see in this world that we make jokes about wanting to see it go up in a big white nuclear flash. We need to become the dreamers again. The ones with the daring and the creativity to fight against the rising damp of defeatism with beauty and with bricks. We need to believe in ourselves and in magic again. Thankfully, we now have a whole new generation to remind us of that.

To every environmental activist out there, be you young, old or immortal, thank you. You forever have my heart, and to the striking school kids, thank you for setting a new standard. We see you.

Your Next Bold Move- Ani DiFranco. Because she also reminds me of who I am again.