Many moons ago, I was a waitress. Scratch that, I was a terrible waitress. Particularly when it came to silver service. One afternoon, aged 17, we had a very large and wealthy party come in, and as I was serving Sunday lunch, I dropped a large piece of broccoli into the open Louis Vuitton handbag of an elderly lady who was dining. Rather than doing the mature thing and admitting my mistake, I simply pushed the bag further under the table with my foot and prayed the woman would blame herself and assume she knocked it in herself. 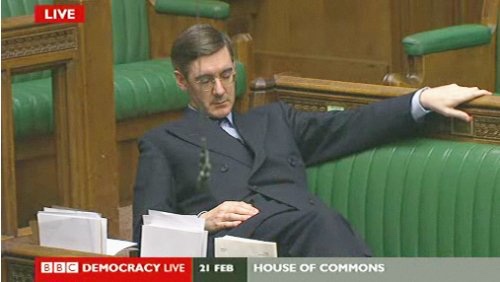 I was never caught for the misdemeanour, but if I had of been, how do you think my conversation with the owner would have gone?

“You can’t just cover up a mistake like that and blame someone else, it’s bang out of order”

“Good. How about I offer you another position instead. Maybe restaurant manager”?

“Well that’s entirely up to you Bandita, what do you think”?

“Aye. We’ll make it a good one too. Those moats don’t clean themselves.”

It sounds ludicrous, but it isn’t a far stretch from what happens in the House Of Commons. In no other employment in the country is it acceptable to drink on the job while making landmark decisions that affect the entire UK and beyond, fall asleep on the middle of meetings and scream abuse at your colleagues from across the room. Nowhere else would you be allowed to employ your spouse for doing absolutely fuck all in order to squeeze more money out of a public purse.

George Osborne would roll in looking like that one kid you used to find trying to lick their own eyelids on the morning of the after party and you and your mates would all realise that not one of you actually knew him and had no idea how he got in. Yelling , jeering and deliberately loud laughing to drown out the opposition’s words is standard behaviour, yet if you did that anywhere else you’d likely be sacked for gross misconduct or a written warning at the very least, while they in the blink of an eye will demand that us proles be ‘civil’ if we dare get ideas above our station and challenge them.

Westminster is the only workplace where they will think nothing of kicking off when cuts to their champagne is suggested, yet will vote in cuts for the disabled and the nations poorest people. Last year taxpayers paid £2.7 million to subsidise bars and restaurants in the House of Commons last year.

A few drinks clearly gives them enough Dutch courage to then look us dead in the eye and say “All in this together”. If they are public servants, why can’t we see their annual performance reviews? Why has Michael Gove had so many roles that we are half expecting to see him in the next Oasis line up? Wouldn’t he have just been deemed unemployable in any other universe by now?

It would be funny if the rest of us weren’t having such a hard time at the moment trying to navigate a very unsure future for the UK. It would be funnier if a homeless man, Gyula Remes, hadn’t died outside Westminster not three months before.

So next time someone at work suggests a dress down Friday or Christmas jumper day for charity, suggest a “behave like an MP in the House Of Commons day” instead. I can’t guarantee you won’t end up slapped or in court for what ensues, but it may hit home what an easy ride we are giving a spoiled kids club with too much power.

Food, music and anarchism View all posts by punkfoodbandita