Yesterday morning many of us sat in horror, watching the news come in that a gunman had killed dozens of people around two mosques in Christchurch, New Zealand, in a terrorist attack.

The 28 year old was quickly named as Brenton Tarrant as he live-streamed the massacre on 8chan, leaving the number of dead at 49 so far with more currently being treated for serious injuries. He first published his ‘manifesto’ online. I say manifesto loosely. Really it was some jumbled, egotistical pseudo-intellectual rantings to justify killing men, women and children for reasons that no sane person could understand. People who pleaded with him to live. People who were just trying to pray before he murdered them.

The attacks have received worldwide condemnation, including from Pewdiepie, who Tarrant referenced in his video while sat in his vehicle, encouraging people to subscribe to his channel. Pewdiepie is a video game YouTuber who has attracted controversy for the racist and anti Semitic terms he has used in his commentaries. He has been quick to publicly distance himself from Tarrant’s actions, but not every one has been so quick to condemn him it seems.

Fraser Anning, the senator for Queensland released a statement in which he said that the attack was an inevitable outcome of Muslim immigration policy and while muslims were the victims in this case, they were usually the perpetrators, that “muslims are killing people in the name of their faith on an industrial scale”. The sly suggestion that Anning hints at is that this was just retaliation. But here’s the thing: Brenton Tarrant didn’t murder muslims in some bizarre revenge fantasy. He killed them simply because they were there. He was quite clear in his intentions during his online activities beforehand and was a self described “eco-fascist” who felt that this was his duty.

So what is an eco-fascist? Sounds like a deeply troubled hippy on a bad Mkat comedown. It’s worse. Really it’s a movement of ethno-nationalists and eugenicists using environmentalism to thinly veil their racist ideas and distorted notion of purity, promoting that returning to our geographical roots can save the planet. Which is odd when you consider that Tarrant was an Australian in New Zealand who had Scottish, English and Irish heritage.

Eco fascism has slowly seeped into environmentalist circles over a number of years, coming into conflict with left leaning activists when they are identified. Some of their accounts contain the hashtag #efds, meaning eco-fascist death squads. Intended ‘as a joke’ of course. Until lots of people die as a result. There also seems to be an obsession with Norse mythology, which was shared by Tarrant who told viewers he’d see them in Valhalla.

Typically the eco-fascists despise multiculturalism and often talk of a need to cull the population. Not white people though, just the brown ones. Because racial mixing is another hatred of theirs. Far right groups will often take crimes that have made the news that we are all rightly outraged and disgusted by- grooming gangs, sexual assaults and murders- but focus only those committed by people from ethnic backgrounds. Regardless of the wishes of the victims of those crimes or their families, they use the public’s anger to fuel their agenda, which doesn’t usually involve genuine concern for the safety of women and girls. For the core of the Far Right, the real source of their vitriol is not assaults on white women by immigrants, its racial mixing even in happy and consensual relationships. Over the last few years I’ve seen this belief become less and less concealed, referring to mixed race people as mongrels and half-breeds and to white Islamic converts as blood-traitors.

Tarrant talked about the decline in birth rates in white Europeans, believed that immigrants were taking over, and described his victims as “invaders who seek to occupy my people’s lands and ethnically replace my own people”. Invaders. Aliens. Mongrels. Vermin. Whatever slur is fashionable in a particular point in history, they have always been chosen to dehumanise a group of people that an individual or a regime wants to harm. For Tarrant it helped him imagine he was carrying out some sort of pest control on behalf of people who are repulsed by him.

I’ve used Brenton Tarrant’s name in this piece to avoid confusion as to who I’m talking about, but I will never utter his name again. He doesn’t deserve the notoriety.

Like many, I’ve shed a few tears of sadness and rage the last two days. To look at the face of three year old Mucad Ibrahim breaks your heart, but the image of one of the victims being carried out on a stretcher pointing his index finger to the sky also broke me.Because my grandad used to do this. It symbolises the unity of Allah, a way to say praise god. He did this when he won at the bookies, when I passed my exams, when he found out I’d been seizure free for couple of months and he did it one last time as he lay frail in a hospital bed moments before he died.

I’m not Muslim and never have been. He never minded that. He was as loved and as ordinary as all the people at the two mosques in Christchurch yesterday. Missing him is still so unbearably painful as it will always be for their families but at least I was able to prepare for it. I could accept that he had come naturally to the end of his life and it was simply time for him to leave mine.

The vile, hateful human who killed 49 people yesterday is not a soldier as he likes to imagine. He’s just a vicious fantasist who took their lives for no reason other than hate and ego. There was no purpose for what he did other than to make the world darker and scarier. It’s up to us to make it light again. 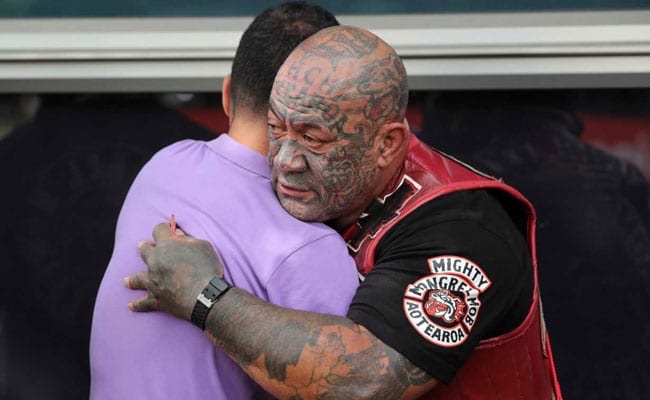