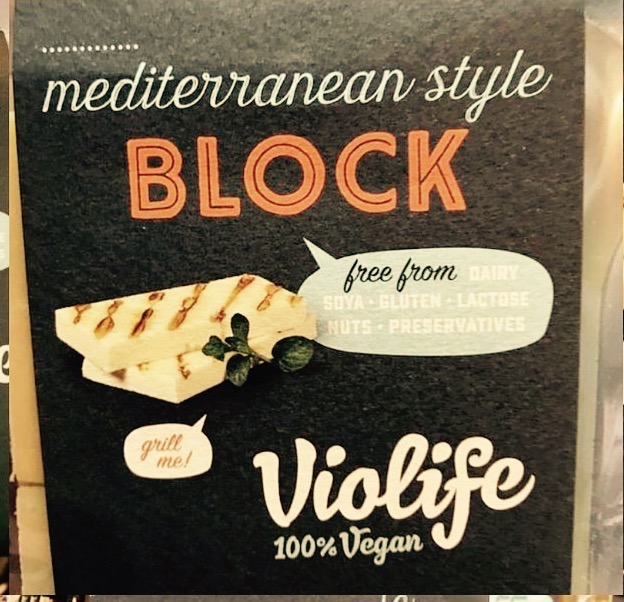 Just to clarify, I’m not actually vegan. I’ve been veggie for around seventeen years and thought seriously a few times about going full Moby.
My partner did Veganuary earlier this year, decided to stick with it and I felt now was a good time to incorporate more and more vegan food into my diet.

I love it. There’s so much more available now and we’ve come a long way from the dark days of beanfeast and sosmix, which was the culinary equivalent of a Nickelback album and could turn an ordinary digestive system into a weapons grade incendiary device.

Vegan food nowadays is generally inventive and fresh and we could all do with more of it.

There’s just been one thing missing from it for me. Halloumi.

I love halloumi more than anything. I make sex noises when I eat it. Eating it is more satisfying than watching the gif of Tommy Robinson tripping up backwards over a traffic bollard.

So when I discovered Violife had brought out a ‘Mediterranean Style’ vegan cheese, I was simultaneously excited and suspicious. Could this really work? My experiences of vegan cheese have been mixed to say the least.

I got some immediately and decided to make it on The Vegan’s birthday. I’d read other people’s experiences of cooking it first. General consensus was that it tends to crisp up on outside and goes a bit gooey in middle. Okay, I can deal with that. Not entirely dissimilar to how deep fried halloumi sounds. This could work.

I decided to pan fry mine. I don’t know if this is where I went horribly wrong. A lot of others seemed to barbecue or grill theirs. What I do know is that the minute it started to cook, despite plenty of oil, it clung to the bottom of my pan like a jealous lover.

No amount of coaxing, cooling or brute force was gonna make this fucker come off. The bit that is supposed to go crispy outside stuck like napalm while the rest came off looking like mayonnaise that had been left out overnight.

But how did it taste? I can deal with it not being pretty, as long as it delighted my tastebuds. Sadly no. If you are after the taste of halloumi, this isn’t it. It’s salty, sure, but is more like cheap cheddar than anything else.

Vegan halloumi destroyed my pan, my hopes and tasted like broken dreams. The outer layer lies in a landfill somewhere, still with the pan it took down with it and destined to be discovered by future archaeologists who will write entire theses about millennial vegan cheese.

I haven’t entirely given up hope though, and today’s musical pairing is ‘Slaughterhouse Rock’ by Dirt, to remind me of why I continue to try to find different ways of eating. 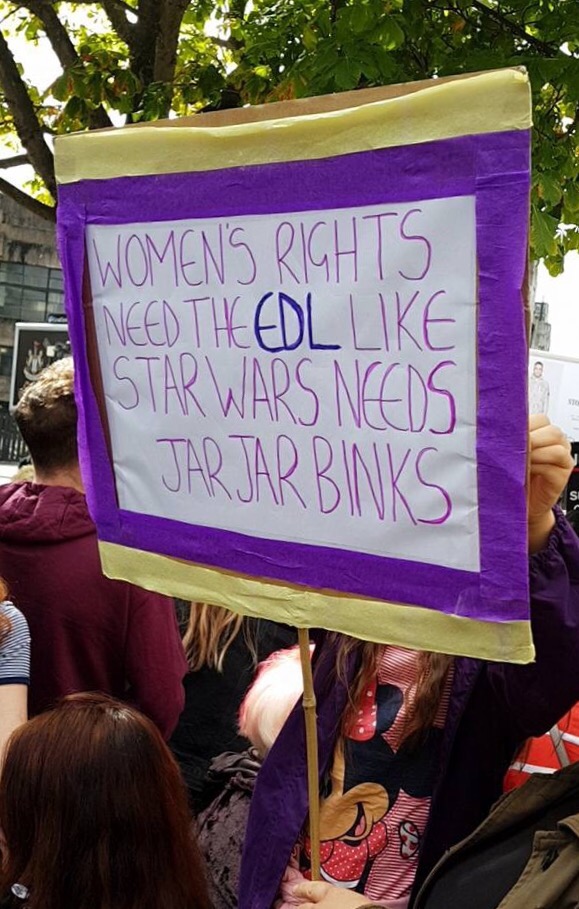 I did think long and hard about starting my blog with such a spicy fireball of a topic, but fuck it, this is what I’m like, so enjoy (or not) this written Molotov cocktail of a post, and hi, nice to meet you. So yesterday, 70 or so members of the English Defence League marched through Newcastle. This isn’t necessarily anything new, they have been known to from time to time. Usually its around immigration, as you can imagine, but lately it seems they’ve been fancying themselves as some sort of champion of women’s rights by focusing on the recent trials at Newcastle Crown Court that resulted from Operation Sanctuary. For those unaware of what this is, Operation Sanctuary was a police investigation that recently lead to the conviction of 17 men and 1 woman for the rape, sexual abuse, grooming and trafficking of vulnerable young women in the North East. The men are mainly British born Pakistani, but by no means exclusively.

And it’s for this reason that the EDL have taken an interest. When one of their fold have ended up in court (a pretty regular occurrence) for abuse of children or women, I don’t recall them shouting in outrage about it. They also have a nasty new hobby of turning up at trials to ‘expose’ the accused, which could potentially jeopardise a trial and puts added pressure on victims that they just don’t need. As with the Justice For Chelsea campaign, the EDL are only ever concerned for women’s safety if the accused are at least a little bit brown. When it’s someone white and famous- *cough formersunderlandfootballeradamjohnson cough*- you find that it was obviously the victims fault, and what’s a lad to do when he’s getting all that attention of young lasses. They do not get to pick and choose when they care about survivors of sexual abuse and they do not get to use them to try and raise their own profile.

The case has caused some heated debate about the attention given to the racial background of the perpetrators with the phrase “Pakistani rape gangs” being hoyed about all over the place.

Now, I’m not at all squeamish about talking about the influence of someone’s culture when talking about abuse. This is something that some people on the left disagree with me on. Sexual abuse infects every part of our world and it manifests and mutates in different ways depending on where you find it. Refusing to talk about the perpetrators religion or background is refusing to talk about an aspect of the abuse which is sometimes relevant and could mean victims are not identified. Or believed. Take any race, any religion, and you’ll find sex offenders in there somewhere. Some will twist passages of religious text to justify why they are such an abhorrent arsehole. Some will use places of worship or their status in the community to target victims. I appreciate the point that the mainstream media will never say “white British gang” in a headline, but shrieking “abuse is found in every race and religion so let’s not talk about it at all” isn’t helping.

We must consider ALL cultural aspects and not be afraid to talk about them, particularly with our young people. Because if we don’t, and they have questions, you know who will talk about them? The likes of the EDL. And they will call us feminazi’s and dykes when we talk about rape, sexual assault and the protection of women at any other time, but suddenly start flexing their feminist muscles like Rosie the fucking Riveter the minute they see a foreign surname on the accused.

The rape and sexual abuse of our vulnerable citizens is political, absolutely. But we must never use victims as political point scoring. This includes demanding justice only if the perpetrators are brown or have a funny sounding surname. It also includes those who say we can’t talk about race or religion but then post an article about fair skinned rapists and saying “oooh look, they’re all white, what do you make of that racists” gleefully. It’s crass as fuck.

The articles about the case in local paper, The Evening Chronicle, has turned its comments section into even more of a horrifying cesspit of human hatred that makes you want to rip your own eyes out and hurl them into the abyss. And if you are familiar with the Ronnie Gill comments section you’ll know what I’m talking about. It’s like The Warriors, if the gangs had all had internet connections and just stayed home bitching and threatening each other online instead of driving around and braying each other.

I get it. It’s an awful subject to talk about. When it happens close to home, you panic and think about how it could have been someone you love. Maybe it was, and you can’t kill the fury you feel inside and want to make sure it never happens to anyone else again and hate anyone who so much as reminds you of the person responsible.

But all this is doing is shutting down conversations. It could stop someone telling you what happened to them because they’re afraid of how you and the world will react. Let’s not shy away anymore. Let’s allow our dialogue to progress further than accusations at the people we don’t like, and rip away all of the masks that perpetrators hide behind.

And on that note, I leave you with ‘Where Next Columbus’ by Crass, from one of my favourite albums, Penis Envy. Because this isn’t about being left or right, but it’s not about sitting on the fence either. I’ll never understand why, on this subject, we aren’t all on the same page. 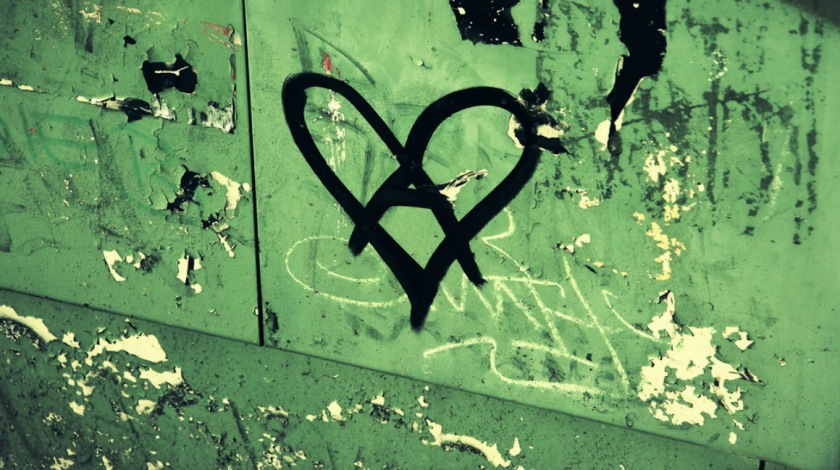 This is my blog. I’m new to this, so bear with me. My idea for a blog called punk food Bandita came several years ago but it’s only just now it’s come to fruition. Being an outspoken and excitable young (*cough*) bandita, I’ve exhausted my wonderful friends with my patter and felt now was the right time to unleash myself on the internet instead.

Things I will crap on to you about are mainly politics and people- I describe myself as an anarchist and I like to write about it. Food- I wouldn’t say I’m a particularly skilled cook but I am interested in trying new things, cooking on a budget, and I’m passionate about the politics of food and believe that feeding others can be a revolutionary act.

I love music too, and will include a song at the end of each blog that ties in with the theme in some way. As you’ve probably guessed, punk is my favourite genre to listen to- particularly when I’m cooking, but I listen to a whole mess of other types of music, so if you have something you think I’ll like, hook a sister up.

We live in challenging times, so let’s discuss and organise and do everything we can to make it that little bit better….